Instructor-led. Train your staff in 6 weeks. Register at Journalism.co.uk
€695.00
Take This Course

Digital Storytelling For The Mobile Generation

Diploma Course: Develop compelling stories, projects and strategies that best serve your target audience - wherever they are.


This is the 6-week, instructor-led Diploma Course authorized by the United Nations for their staff training.

In this masterclass you will learn how to plan , film, edit and measure the impact of audience-centered stories.
All you need is a smartphone.

The instructor will lead the class each week with tutorials and projects. Participants will be able to share their projects and interact with classmates and the instructor as the make progress to the final project and certification.

Click on each course module below to see a detailed syllabus. Trainees need to commit to 4 hours per week to complete this course.

Digital Storytelling For The Mobile Generation is a truly unique method of teaching/learning how to cover or create the video or image stories with the use of the mobile phone devices and technologies. I greatly value the content of the Courses and would like to thank Robb Montgomery for this brilliant Smart Film School that is Uniquely Smart. I look forward to taking more Courses as I see a lot more interesting and useful content being available to be studied and acquired in this 21st Century of Information and Communications Technologies.

Robb Montgomery is a professor of mobile journalism and the author of Smartphone Video Storytelling (Routledge – New York & London). He is an award-winning documentary filmmaker and former newspaper editor (Chicago Sun-Times and Chicago Tribune).

In 2011 he developed the mobile journalism training program for Radio Free Europe / Radio Liberty and has trained more than 20,000 storytellers in mobile video methods.

He holds a b.a. in Journalism (1990 - Eastern Illinois University). 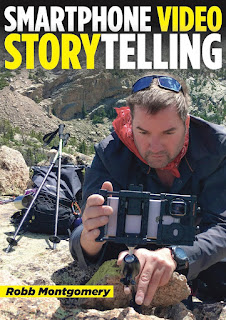